Definition: Truck and ladder guy- AKA, Chuck in a truck. These are the guys that own a truck, ladder, and a couple of tools and run around the neighborhood installing roofs without a legitimate business or company in place.

I’ve had my fair share of job revisits lately. Roof projects that I quoted 2 or 3 years ago that for one reason or another the customer went with another company. Losing a job has never really bothered me. I can’t win them all.

But when I go back to meet with a customer that hired the wrong guy, and they know they hired the wrong guy, I feel a bit guilty. I feel guilty that I might not have explained my product good enough. Our presented my company or staff in the right way. Or maybe I didn’t promise the customer the world, as some salesmen are in the habit of doing. I rub shoulders with a lot of straight out salesmen that will do just about anything to sell a job. Making promises that they may intend to keep, but don’t have the ability or connections to keep. 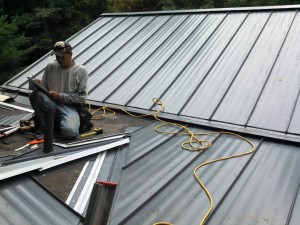 CASE IN POINT: I met with a couple the other day that received quotes from me and a big box store that hires the work to sub contractors. I never asked the deciding factor, but they did struggle with who to choose, eventually choosing the big box store. Now this house needed a new standing seam metal roof. That in itself requires a skilled craftsman that has been trained in metal bending, and panel installation. But the garage was detached from the house, and they wanted it attached by building a foyer between the two, matching the roof planes, and installing the metal roof.

Now this requires a skilled framer that can establish a common plane between the 2 buildings. But the roof planes were at different heights. Only 2-3 inches, but enough that when joining the building it left a considerable wave in the roof. Athletically this left a curved and wavy look to a bright red metal roof that sticks out like a sore thumb.

After inspection of the roof we found that though this was a concealed fastener system (screws are underneath the system,not exposed) the installer had put in screws in all the ridge caps and up all the valleys. Clearly incorrect. Any many more errs too numerous to list here.

All this to say, please do your homework.  Not all contractors that work for the big box stores are bad, nor are the that don’t work for them are good.  But it has always seemed to me that if the contractor has enough work on his own reputation, then he wouldn’t need to get work from those stores, nor have the time to do them.  Call those references, go for a ride and look at those houses. It just might save you a lot of head ache, and probably thousands of $$.